Sneak Preview: This recipe for Southwestern Stuffed Peppers Without Rice will show you how to roast and stuff bell peppers with a healthy and meaty filling.

Are you trying to avoid the “whites” (that’s rice, potatoes, and bread)? If so, you need this recipe for Southwestern Stuffed Bell Peppers Without Rice. That’s right! No rice. Instead, riced cauliflower stands in for the rice. Cauliflower-haters won’t even notice. All the other flavors and colors are sure to distract them.

Is this recipe Keto or Low-Carbohydrate?

This recipe is colorful and full of veggies. Nevertheless, it does not qualify for the Keto diet or a strict low-carbohydrate way of eating. The black beans, corn, and tomato sauce are disqualifiers.

Based on one average-sized bell pepper-half stuffed to the gills, there are 314 calories per serving. Besides that, you’ll get 19 grams of carbs, 21 grams of protein, and 5 grams of fiber. All in all, these are pretty good statistics.

Which color of bell pepper is the best?

Green peppers are the unripe version of red, yellow, and orange peppers. It is the same way green tomatoes turn red (or yellow or orange) as they ripen. Green bell peppers taste more pungent by comparison.

Which is your favorite?  Red, green, orange, or yellow bell peppers? I prefer red peppers because they taste milder. Same for the yellow and orange ones.

What does “Southwestern” mean in this recipe?

Cumin, chili pepper, and cilantro lend a distinctive southwestern flavor profile to this recipe. Black beans, Jack cheese, and corn continue the theme. If you like these flavors, I have a few other southwestern recipes such as Southwestern Eggplant Dressing and Southwestern Jasmine Rice.

Use your creativity with this recipe. For example, leave out ingredients you don’t have or don’t like and add things you do.

Vary the meat and vegetables according to what is in your refrigerator.  The recipe is only a jumping-off point.

Specific substitutions or deletions may alter the “southwestern” vibe. For example, using parsley instead of cilantro lends freshness and color but not the same exciting flavor as cilantro.

How to freeze and reheat stuffed peppers:

These peppers are almost always available in my freezer.

Place the appropriate number of peppers into a casserole dish. Fill peppers but don’t add cheese or cilantro. Cover with plastic wrap, then cover with aluminum foil or slip into a plastic bag. Freeze.

To serve: First, let them defrost in the refrigerator. Remove plastic wrap, then cover with foil. Heat in a conventional oven 20-30 minutes at 350 degrees F until hot. Add cheese in the last five minutes. Garnish with cilantro, if desired.

After stuffing the peppers, cover and refrigerate them. When cooled, wrap each stuffed pepper (no cheese or cilantro) with plastic wrap, then foil and freeze.

To serve: Remove plastic wrap and foil. Pop individually frozen peppers into the microwave for 5-6 minutes and you’ve got a light supper.

Roasting softens the bell peppers — no need to boil them.

What can I do with leftovers?

This recipe makes a lot. I revised it upward so there would be plenty of leftovers to freeze per the directions above.

Often, I end up with leftovers of the filling, depending on the size of the peppers. That’s when I pull out tortillas–corn or flour.

My favorite brand of flour tortillas is Tortilla Land. They are raw tortillas available at the grocery store. Cook them in a skillet at home. They are so much better than precooked tortillas in my opinion.

I recently discovered this recipe for making flour tortillas at home. If you are up for that sort of thing, these are fabulous!

Slice the stuffed pepper shell into strips. Fill the tortillas with warmed stuffed-pepper filling and sprinkle with more cheese. Wrap up like a burrito.

How do I roast bell peppers?

Divide peppers in half by slicing through the stem. Clean out seeds and membranes. Place upside down on a foil-lined cookie sheet and spray with oil. Place in preheated oven on the bottom rack and roast for 15-20 minutes.

Peppers are done with they start to wrinkle slightly and have a few brown spots. (The peppers in this picture are a touch overcooked. Don’t do what I did.)

When cooled, turn the cooked peppers face-up and arrange in a 9 x 13-inch baking dish or pan.

Add remaining ingredients except for cheese and cilantro and stir.

Cover and simmer on the stove for 8-10 minutes until mixture is heated through and zucchini starts to soften.

How to stuff and bake peppers:

Use a large spoon or ice cream dipper to transfer filling into each pepper. Pack as tightly as you can, making sure to stuff filling into the corners of the peppers.

Sprinkle with cheese and return to 350˚F oven for about 10 minutes. 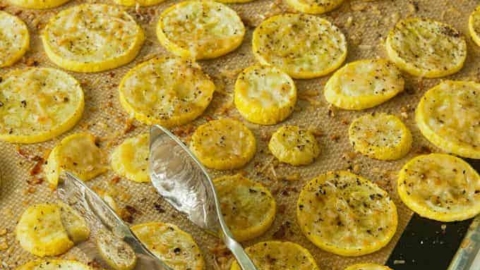 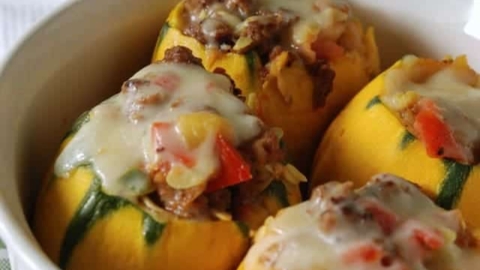 Unusual looking 8-ball squash with a familiar taste make a beautiful presentation stuffed with sausage and other veggies. 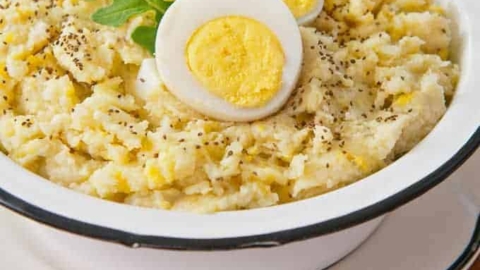 Cauliflower substitutes for potatoes in this American classic. 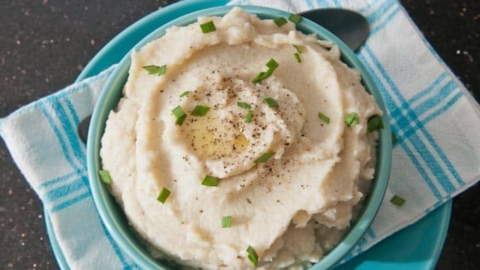 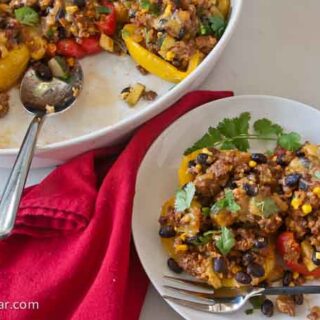