Sneak Peek: Mix this Bread Machine Cinnamon-Raisin Bread in your bread machine, then roll it out by hand to get that classic swirl. Bake it in your oven for a superior crust. The secret ingredient? A pinch of ground cloves in the filling accentuates the cinnamon flavor.

Am I the only person who likes to unroll, separate the layers, or otherwise dissect my food as I eat it? So unroll this bread as you eat it so you can appreciate all the layers of cinnamon as you smell and taste them.

If you’re wondering how you can swirl your bread in a bread machine, I will show you two ways. My favorite is to remove the dough after the DOUGH cycle, shape it by hand, and bake it in your oven. That’s how you get the best crust (see how thin it is in the picture) with even browning and an even texture throughout the bread.

You can also interrupt the regular bread cycle to pull the dough out and shape it. Keep reading for more details.

I like to bake this cinnamon raisin bread recipe in a covered Pullman bread pan. It’s perfect for this recipe to keep the swirls under control. Compare the picture above with one further down in this post where I used a regular loaf pan. The coils aren’t nearly as pretty.

You will not get cinnamon-raisin bread that looks like the one above if you bake your loaf inside a bread maker. That’s why I almost always mix the dough in a bread machine and bake it in my oven.

No worries if you don’t have a bread machine. Use a stand mixer or mix this bread by hand. See the recipe notes for details.

A word about the filling:

Most recipes call for white sugar or brown sugar and cinnamon for the filling. The problem is the layers. They want to pull apart as they bake. See the old picture below using a different recipe.

I got the idea to use powdered sugar in the filling from Jennifer at Once Upon a Chef. The cornstarch in the sugar “glues” the layers together. Baking the bread in a covered Pullman pan helps keep the cinnamon coils from separating.

Can I make this bread from beginning to end in a bread machine?

The answer is yes. I can think of at least two approaches:

Why did my cinnamon swirl bread split on the side as it baked?

Two possible reasons:
1. When rolling the dough after applying the sugar-cinnamon mixture, avoid stretching the dough before pinching the edges shut.
2. The pan you used was too small.

Although the loaf on the left looks alright, the picture on the right shows a malfunction. Unfortunately, both images are of the same loaf. I pulled the dough too tight while rolling it and before sealing it. As a result, the dough split as it baked and spilled the sugar and cinnamon out into the oven. Thankfully, I had placed a silicone mat on the rack below to catch any drips.

How to assemble Cinnamon-Raisin Bread after the DOUGH cycle finishes:

Please note: These pictures are of dough without raisins (so my grandkids would eat it).

When and how should I add the raisins?

Chop the raisins coarsely or use currants (nature’s mini raisins). Add them when your machine beeps that it’s time for add-ins.

If you add raisins in the beginning, the machine will pulverize them. Not only will it change the color of the bread, but you also won’t experience the sweet flavor bursts from the raisins.

Some people sprinkle them on top of the cinnamon-sugar filling. I don’t care for that method because the raisins tend to fall out as you slice and eat the bread.

How can I know when this loaf is ready to pull out of the oven?

Use a quick-read thermometer (here’s a cheap but functional model). The internal temperature (in the middle of the bread) should reach 190˚F. If the crust gets too dark, lay a piece of foil over the top. Next time move the shelf down a notch.

Why did my cinnamon-raisin bread turn out dense?

The possibilities are endless, but one of the most common causes is too much flour. Using a measuring cup often results in adding too much. Next time, weigh the flour with a digital scale. Here’s a basic scale for not much money.
Another common reason for denseness is that the bread did not rise enough. Enriched bread (lots of butter, sugar, and eggs) tends to rise slower. If your kitchen is cold, it will also slow down the rise time. Allow plenty of time to make this bread in a cold kitchen.
Read more about the causes of dense bread here.

Homemade bread with no preservatives can’t compete with store-bought bread when it comes to shelf life. Eat what you can the first couple of days and put the rest in the freezer. Keep the loaf in a plastic bag, but don’t store it in the fridge. If you make a lot of bread, I recommend these plastic bread bags because of their long shape.

Final thoughts: Are you a fan of a pinch of cloves in your cinnamon bread? If you are, be sure to try my favorite cinnamon rolls and these Tangzhong Cinamon Rolls. 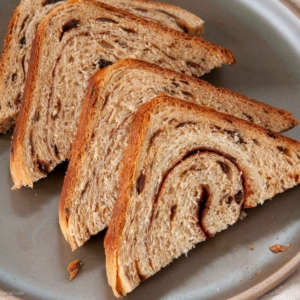 GLAZE: (optional if you are using a 9×5-inch loaf pan)