Sneak Peek: Slow-Cooker Pulled Ham served with a Honey-Mustard Barbecue Sauce is a make-ahead shredded ham that’s gentle on the pocketbook, easy to serve, and fun to eat

Often when I encounter cooked ham (especially in a sandwich), I see pieces of fat hanging off the edges that need to be trimmed off. I resist performing surgery at the table because it seems uncouth.

With this pulled ham recipe, the “fat-ectomy” is done ahead. No more worries about cutting the big pieces in half, looking for the slice with the least fat, or avoiding the dried-out slices (not that I would ever really do that, of course.)

Do you love make-ahead recipes?

Spending quite a bit of time in the kitchen is thing. Just don’t ask me to do it after a long day at work or after coming home from church (for example, Easter Sunday).

I am smitten with this simple and inexpensive way to prepare shredded ham that I first saw here. Mel cooked hers on the stove. But since I’m a slow cooker girl, this is my version.

4 reasons why this ham is perfect for a celebration:

All the work can be done ahead of time.

Buy an unsliced, bone-in, smoked, shank ham. Cook it a day or two ahead of time in your slow cooker with water and cider vinegar.

After cooling a bit, shred the ham with two forks, your fingers, or a food processor (using the bread kneading blade).

Another easy way to shred ham is in a stand mixer. Use the flat beater attachment. Add chunks of ham to the bowl. Select a medium speed and turn on. After about 30 seconds (depending on how much meat is in the bowl), you will have shredded meat.

Store in the refrigerator.

Pulled ham (or gammon) requires no attention for the last hour before serving.

You will have plenty of time to attend to other details of your meal.

When you are ready to serve, pop ham into the oven (or back into the slow cooker) layered with brown sugar and mustard.

The subtle vinegar flavor left behind from the long cooking time combined with the sugar/mustard treatment results in an irresistibly tender and piquant meat entree.

The long water and vinegar bath help to neutralize the salt.

Ham can be really salty, but sitting in the slow cooker all day helps.

What about all the fat?

As you shred the ham, it’s easy to pull out any fatty pieces. Honestly, dissecting the fat from the meat can be slightly tedious. But since you can do it ahead of time, it’s forgivable. Exam gloves are helpful.

Easier to serve and eat than a whole ham.

It’s easy for kids to eat this ham since no fat has to be trimmed off on their plate, and the shreds are already bite-sized.

Or, stuff some into homemade or store-bought slider buns for an easy-to-eat miniature sandwich.

How to make slow-cooker pulled ham:

I prefer this ham with no additional condiments. But if you are a mustard lover, you might appreciate an extra dose of mustard flavor provided by the Honey-Mustard Barbecue Sauce pictured below.

Incidentally, grilled meats such as ribs or chicken benefit from the same treatment.

Speaking of homemade rolls, the bread you see in the picture above is my best clone of Sweet Hawaiian Bread. You can make it in your bread machine.

Do you need more ideas for ham? 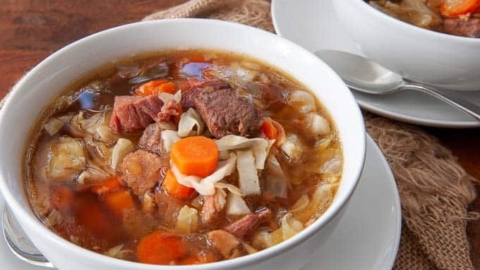 Ham Stew with Beef and Bacon: Popular with Meat Lovers

This hearty Ham Stew with beef and bacon satisfies and warms but won't leave you weighed down. The secret is in the apple-flavored broth. 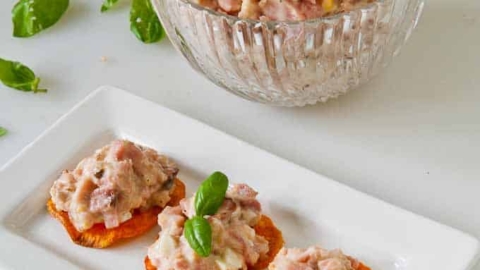 Make ham salad with leftover ham, hard-boiled eggs, pickle relish, and mayo. Basil make this recipe especially memorable. Serve on rolls, in sandwiches, or my favorite, oven-baked sweet potato chips. This recipe is easily cut in half if you don't have a pound of ham. 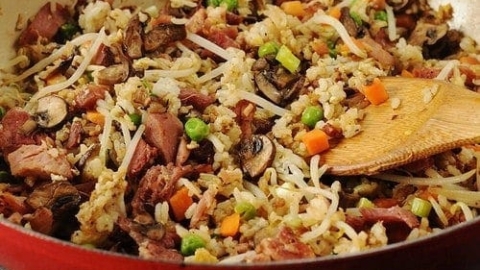 Ham, various vegetables including mushrooms and rice stir fried together. 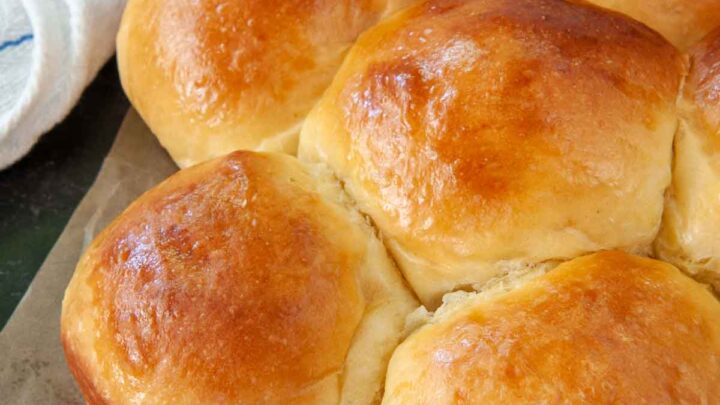 A sweet and soft roll in the same style as my favorite Hawaiian bread at the grocery store. Instructions for mixing and kneading in a bread machine, then shaping by hand and baking in a conventional oven.

Did you enjoy this recipe? If so, you can help others and me by leaving a 5-star 🤩 rating in the comment section below. No comment is required. 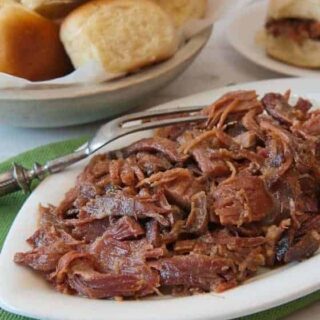 This ham freezes well. I love to portion it into small individual packages that I can nuke and add to my salad or make into a quick sandwich. Try it in a baked potato, baked sweet potato, or add to a chicken barbecue pizza. How about some ham and cheese quesadillas?  The nutritionals include the mustard barbecue sauce.

What brand of ham do you recommend? I’m in the Dallas area also.

Gina, When I do the pulled ham, I go for the cheapest---think Aldi. It doesn't matter if there's a lot of fat because you'll be pulling all that out after a trip through the slow cooker.

We have packages of this in the freezer all the time. I freeze the sauce in small jelly jars & just spoon some out to thaw a few minutes before we plan to eat.

Yes, I am looking forward to that bread recipe also. Yummy!! What a great idea for the ham. I must try!! Looks so good!!

This looks divine! And easy, so what's not to like? You seem to always be able to pull a rabbit from your hat, Paula. Easy, tasty, convenient, it doesn't get any better than that. My husband cannot eat nitrates, so this would be a great solution for an Easter ham. Oh, and I am really looking forward to that clone of sweet Hawaiian bread.