Sneak Preview: These easy bread machine cinnamon rolls are traditional cinnamon rolls frosted with cream cheese icing. The secret ingredient (optional) is a pinch of cloves in the filling. It will remind you of pecan twirls.

Do you remember the pecan twirls we used to eat for breakfast as kids? They came in a foil pan with round molded cups for each roll. As you slowly unrolled them, the pecans would fall out everywhere. What fun–unless you were the person who got to sweep the floor.

I think I figured out the flavor that made those twirls extra delicious.

Add a tiny bit of ground cloves to the brown sugar filling. The cloves enhance and magnify the cinnamon flavor the same way espresso powder intensifies chocolate flavors. The flavor of these cinnamon rolls reminds me of those old-fashioned pecan twirls.

To people who live in Ft. Worth, TX: I’m guessing cloves are the secret ingredient in the fabulous bread pudding at Ellerbe’s in Ft Worth. Have you tried it?

This recipe for homemade cinnamon rolls is a variation of my classic dinner rolls. I always mix and knead the dough in my bread machine, shape them by hand and bake them in a conventional oven. If you don’t have an oven, see the FAQ below for alternate instructions for using your bread machine.

This recipe is designed for mixing and kneading in a bread machine. However, you can also use a stand mixer or do it by hand. See the recipe notes.

How to mix and knead cinnamon rolls using a bread machine:

Note: The liquid ingredients do not need to be warmed. Conveniently, the friction of the paddles will heat up the dough in a hurry.

Open the machine after the first minute to ensure the paddles are engaged and working correctly. The dough should start to clump.

You may have inadvertently mismeasured if the dough looks like pancake batter or is dry and crumbly. Slowly add a small amount of flour or liquid until the dough clumps.

How to shape rolls:

How to bake and frost sweet cinnamon yeast rolls:

How long will these cinnamon rolls stay fresh?

Like donuts, cinnamon rolls are best right out of the oven and for the rest of the day. If you want cinnamon rolls that stay fresh for several days, try these Tangzhong Cinnamon Rolls you can also make with your bread machine.

Can I freeze bread machine dough?

Yes. Freeze the unshaped dough as soon as the DOUGH cycle ends. Alternatively, freeze the shaped rolls before the final rise. Double wrap and store either in the freezer for up to a month.

When ready to use, let the dough thaw and shape the rolls. Allow a final rise before you bake them. If you freeze shaped rolls, allow them to thaw and become puffy before baking them as directed.

Can I freeze the baked rolls?

Yes. Double-wrap them and eat them within a month. The rolls will taste pretty good if you zap them briefly in the microwave and eat them immediately.

Is there any way to bake these in a bread machine?

Yes. Select the regular cycle, not the DOUGH cycle. Remove the dough from the bread machine pan before the final rise. (Check your owner’s manual to figure this out.) Remove the paddles. Shape the cinnamon rolls quickly. Place the rolls back into the pan in rows and let the bread cycle continue. They should rise and then bake.

Can I make the dough the night before?

Yes. After making the dough with the DOUGH cycle, you have two choices. Put the dough directly into the refrigerator and shape it the next day. Or shape as soon as you remove the dough from the bread machine pan and place the pans of rolls (covered) into your fridge overnight.

The following day, make the dough into rolls and let them rise before baking. Or let the shaped rolls warm up and rise, then bake them as directed in the recipe.

What can I substitute for the cream cheese frosting with coffee?

Leave out the cream cheese and/or coffee. Instead, use a couple of tablespoons of butter and milk or cream. Add a teaspoon of vanilla extract. Mix until the frosting is creamy and spreadable.

Why did my cinnamon rolls pop up in the middle?

Your pan may have been too small. If this happens, carefully push the “middles” back down into the rolls when you remove them from the oven. Problem solved–for this time.

Bonus: How to make a homemade flour shaker

My mom used to buy pecan swirls at the day-old store. But, come to think of it…do they still have day-old bread stores? Oh, nevermind, I’m starting to feel old. 🫣 I need a cinnamon roll to make me feel better. 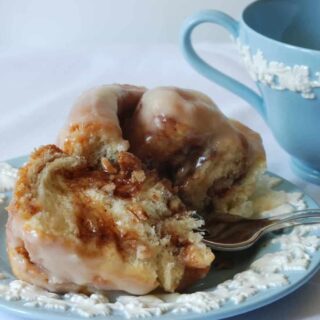 Shaping the dough into rolls: