Preview: Make this Cinnamon Melba Toast Recipe with stale unsliced bread. Sprinkle with cinnamon and sugar before baking. These are similar to the sweet crisps sold at Corner Bakery Cafe.

Have you ever noticed how fast homemade yeast bread goes stale?  When compared to store-bought bread, do you ever wonder what they put in it?

Here’s a great solution for whatever you don’t eat in the first 24 hours.  I did this with my Sweet Bread Machine Banana Bread with Yeast made in my bread machine. Do it with any un-sliced loaf, either plain or sweet.

1. It makes the bread seem to go further when sliced thin.
2. The toasts last for days.
3. Each slice contains much fewer calories than a regular slice of bread and even less if you skip the butter and sugar on top.

Want to know a secret?  I hid half of the banana yeast bread loaf just so I would have some to make these cinnamon crispy toasts. (Don’t tell on me, please.) They are as good as a cookie!

How to make Cinnamon Melba Toasts from scratch:

In other words, slice it as thin as you can without the bread turning into crumbles.

2. Brush both sides of each slice with melted butter.

3. Sprinkle with a mixture of 2 tablespoons of granulated sugar + 1 teaspoon of cinnamon.

If you want to “guild the lily,” sprinkle sanding sugar on top of the cinnamon-sugar mixture. It is so-o-o good.

Since it’s pretty much impossible to slice the bread evenly by hand, you can expect some slices to brown quicker than others. Watch closely when the bread starts to brown so you can pull out those that are done first. 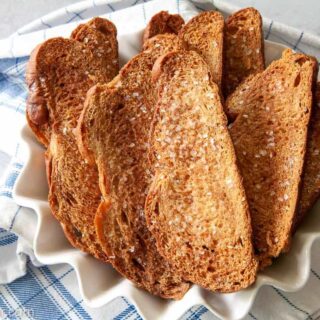 The time to bake will vary greatly depending on the thickness of each slice. Some may be ready before others so keep an eye on them. They should be dry, crisp and golden brown. Press on them with your finger. If they bounce back under pressure, they need a bit more time. It they start to get browner than golden, they are getting too done and will begin to taste a bit burned.

Author: Paula Rhodes
Course: Snacks
Cuisine: American
Keywords: Cinnamon-Sugar Melba Toast, Corner Bakery Crisps, leftover bread, snacks
Did you like this? Leave a 5-star rating inside the recipe at the top! 🤩 No comment is required.