You need this recipe for a pie crust made with yogurt if:

As a young County Extension agent, I made a guest appearance on a TV cooking show at 5:30 one Saturday morning. My topic was “How to make a perfect pie crust.”

Ever since my 30-minute brush with fame, I’ve been obsessed with pie crusts. This flaky and buttery pie crust with yogurt is my best and favorite recipe to date. I think you will love it, too. It is worthy of your favorite pie filling. Speaking of favorites, be sure to take a look at my favorite pecan pie and my grandma’s Magic Pumpkin Pie.

A few years ago, I ran across a crust recipe in a magazine (remember those?) calling for sour cream in addition to butter.

Reading that article gave me an idea.

What if I replaced the sour cream and water with yogurt?

I tried it, and It worked.

Why does yogurt make a pie crust flakier?

A bit of research revealed why sour cream is a little-known secret to flaky pie crust. The same principle seems to apply to yogurt.

The acid in the sour cream slows down the development of gluten (the structure-forming protein in flour), which makes for a more tender and flaky crust.”

The acidity of the yogurt acts the same way vinegar or lemon juice does in some recipes. The yogurt also replaces water as a binder. A touch of sugar and an egg yolk increases the richness and encourages browning.

I don’t understand it, but the yogurt seems to work magic. Your reward is a crust that’s full of layers and flavor.

How to assemble a buttery pie crust with yogurt:

Using a stand mixer with a paddle attachment, combine flour, sugar, and salt at low speed for five seconds in a large bowl.

Cut butter into eight pieces and add to the flour.

Mix on low speed for about 45 seconds. (I count it off). Some of the pieces should be the size of peas while others will look more like oatmeal or bread crumbs.

Combine yogurt and egg yolk. Add all at once to the flour.

Mix on low speed for 12-15 seconds. All particles should be barely moistened but not yet coming into a ball. You’re going for a shaggy mess that will hold together if you squeeze it between your fingers.

Dump the dough onto your work surface–a big piece of plastic wrap or a floured tea towel.

How to “smoosh” the crumbles (aka as fraisage):

Don’t miss the video showing how to do this.

Take the palm of your hand and slide it face-down from the middle toward the side of the pile to smoosh the crumbs together and flatten out the big pieces of butter. Work your way around the mound, smashing the dough crumbles into one big clump.

There should be no significant and visible pieces of butter. If the butter pieces are too large, they may melt as the crust bakes and drip onto the oven floor. Not good.

Wrap and chill the dough for at least 1-4 hours to allow the gluten to relax.

How to roll out a buttery pie dough:

Use a well-flour pastry cloth and rolling pin sock for easy roll-out.

After placing the dough into a pie dish, fold the rough edges under. Crimp as desired.

How to blind-bake this yogurt pie crust recipe:

Addendum 11/12/21: After getting my hands on the fabulous “The Book on Pie” by Erin McDowell, I have changed the instructions for par-baking this crust. She recommends NOT freezing a rolled-out pie crust. Better to chill it in the refrigerator. You can freeze the dough (up to three months) before rolling it out. But don’t freeze a rolled-out crust or bake it straight from the freezer.

The other thing Erin suggests is to heat the oven to 425˚F. The bake is faster and helps to prevent the crust from shrinking. Of course, you still need to dock the crust and put some weights inside the pie shell, as shown below.

I tried her suggestions, and sure enough, my pie crust baked up better. The directions are revised accordingly.

Chill prepared pie crust while you preheat the oven to 425˚ F.

My favorite is a heavy chain like you can purchase by the foot at your local hardware store. There’s no reason to chase beans or pie weights around the kitchen.

Fill the pie shell with weights of your choice.

For a partially baked crust (as seen above), bake for 15-17 minutes at 425˚ F. The crust should be barely turning brown. Next, remove the weights and foil and allow it to bake for 2-3 minutes longer. For a fully baked crust, return the crust to the oven uncovered for another 10-12 minutes or until the crust is golden brown.

Why does my pie crust drip butter?

Most likely, the pieces of butter were too large after you finished cutting them into the flour. An easy way to ensure this doesn’t happen is to grate the butter.

📌Kitchen Secret📌
I always place it on a rimmed cookie sheet covered with foil or a silicone baking mat when baking this pie crust. The cookie sheet will catch any buttery drips that might otherwise fall to the oven floor and burn. Also, the foil will make clean-up a breeze.

Why is my pie crust tough and hard to cut?

You have likely overprocessed the dough. Another reason is adding too much liquid or too much flour.

Why did my pie crust shrink when pre-baking it?

Several possibilities:
The dough was over-processed.
The dough was stretched while placing it into a pie pan.
The dough should be well chilled but not frozen when you place it in the oven.

Can I make mix this up by hand if I don’t have a stand mixer?

Yes. Here’s an easy tip for making sure the butter pieces get mixed in well without overdoing it. Freeze the butter, then grate it by hand. Add it to the bowl containing your flour mixture and stir until you get a crumbly dough. Then, proceed with the recipe as written.

Can I freeze this pie crust?

Yes. Freeze the dough for up to 3 months. Double wrap to avoid freezer burn.
When ready to make a pie crust, let the dough thaw in the refrigerator overnight.

Can I use an egg wash on my pie crust?

Yes. It is good for adding shine to your crust. Mix 1 egg with 1 tablespoon of water. Whisk it well. Glaze the crust immediately before placing it into your hot oven. 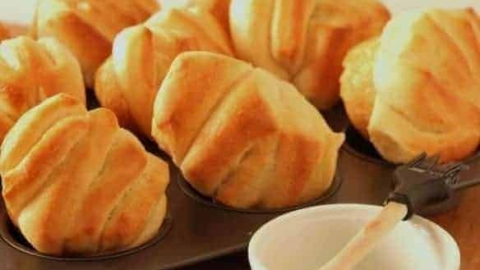 Yogurt Fantans (made in a bread machine) 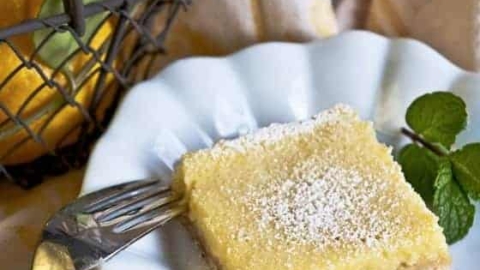 Lemon Bars with a coconut shortbread base and a creamy lemon layer over the top. Recipe calls for
using the entire lemon (minus seeds)--no grating or squeezing required. 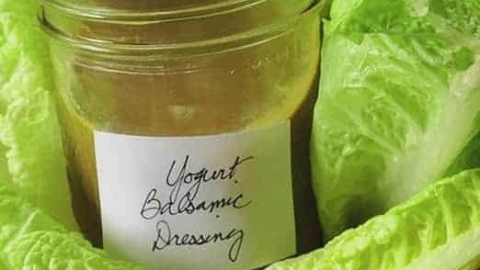 A low-calorie dressing with nonfat Greek yogurt as the base. Light on fat, heavy on flavor. 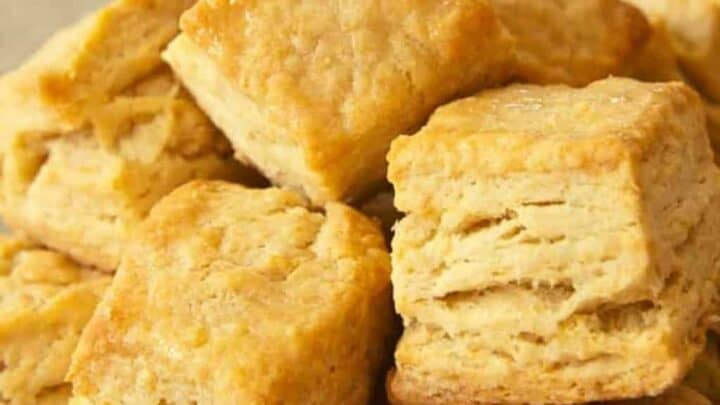 Light and flaky layers set this flaky biscuit recipe apart from the average biscuit. Use whey drained from yogurt for the liquid or buttermilk if you don't have yogurt whey. It's one of the best uses of whey I can think of. 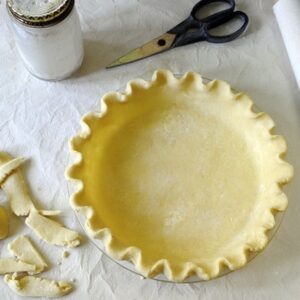 How To Blind-Bake (no filling) a Flaky Pie Crust with Yogurt: When ready to bake, remove from the refrigerator and use a fork to dock the crust. Press a piece (or two) of non-stick aluminum foil or parchment paper to the inside of the pie crust. Fold the edges of the foil carefully over the decorative edge to protect it from over-browning. Although you could fill the pie crust with beans, rice, or pie weights, I prefer to use chain-link sold by the foot at hardware stores. Bake in a preheated 425-degree oven for 15-17 minutes. For a partially baked crust, carefully remove foil and weights, and let bake another 2-3 minutes until the crust is light brown. If you need a fully baked crust, continue baking the crust (uncovered) for 8-10 minutes longer or until golden brown. If you have trouble with the butter leaking out of the crust when baking: Freeze the butter, then grate it. Add to the flour mixture and continue with the recipe as written.