Sneak Preview: This recipe for Pork Stroganoff with Mushrooms and Sour Cream features sautéed pork loin strips in a sour cream gravy seasoned with cumin and cilantro for a Southwestern flair. Serve over rice, noodles, or mashed cauliflower.

Have you been to Santa Fe, New Mexico? As you walk the streets, you can smell the flavors of the Southwest beckoning you to the many restaurants. I get nostalgic whenever I think about it or make this recipe.

Pork loin, bacon, cumin, sour cream, cilantro-can you imagine how fragrant these ingredients are when cooking in your kitchen? (Reminds me of this recipe for Bacon-Wrapped Stuffed Pork Tenderloin with Raspberry Chipotle Sauce. The smell while it bakes is incredible.)

The difference? Instead of beef, this stroganoff is made with pork loin and seasoned with cumin and cilantro. You’ll soon be wondering why you haven’t made this already.

The 10th edition of the Cooking Texas Style cookbook contains the recipe that inspired me. I’ve been making it for years, so it’s well-tested.

The name in the book is “Puerco en Salsa de Comino,” but that doesn’t mean a lot to me despite three years of high school Spanish. So I renamed the recipe to Pork Stroganoff so I could remember it.

Tip: How to cut herbs easily

Try using a pizza wheel to chop fresh herbs. It works great, especially when the blade is good and sharp.

How to make Pork Stroganoff with a Southwestern Twist:

1. Fry bacon pieces in a 10-inch skillet. Remove from the pan and set aside. Leave bacon grease in the pan.

3. Add sliced mushrooms to onions and garlic. Fry until they start to brown on the edges. Remove from the skillet and set aside.

4. If necessary, add vegetable oil or bacon grease to the pan. Brown the pork strips. Do this in two batches, so the meat isn’t crowded.

What should I eat with Pork Stroganoff?

Traditionally, people serve stroganoff with noodles. However, the Southwestern twist makes rice seem more appropriate. I particularly like the Lime-Cilantro Rice from Simply Recipes with this recipe. More options include noodles, cauli-rice, or mashed cauliflower.

Can I make this ahead of time?

Prepare this dish a day ahead of time if you like. Save the cilantro until you are ready to serve.

Can pork stroganoff be frozen?

If you want to freeze this dish before serving, don’t add the sour cream or cilantro. Instead, stir in the sour cream after thawing the frozen casserole. Garnish with cilantro at the last minute.

Can I reheat this recipe?

Yes, but do it gently. If the stroganoff boils, the sour cream may separate.

While this recipe may not taste exactly like what you might get in Santa Fe, I think you’ll enjoy the Southwestern flavors for a change of pace. 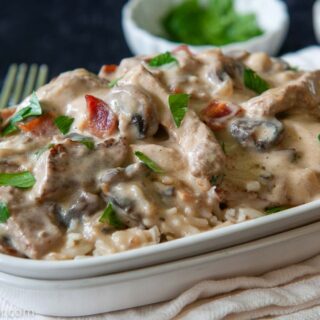