Preview: Although your Grandma probably wouldn’t make this Apple-Cinnamon Bread recipe with a bread machine, I’m pretty sure she would love to eat it. Your friends and family will like it, too.

Wait for the aroma of baking yeast bread with buttery cinnamon, sugar, and spiced apples to fill your kitchen. Drizzle with decadent cream cheese icing. Pour yourself a cup of coffee and prepare to enjoy. Move over cinnamon rolls!

Although the recipe is written to be mixed and kneaded in a bread machine, you can easily do it by hand or use a stand mixer. See the notes in the recipe.

If you ask Pinterest, one of the most popular posts on this blog is entitled “Apples in a Bag” as pictured below. It’s super easy with only 4 ingredients and makes a healthy snack or dessert for 1-2 people.

Seeing how as I’m a bread-machine freak and I love these apples, it was high time to create a bread recipe incorporating “Apples in a Bag.”

Since I love to make yogurt, you probably won’t be surprised to hear that this Whole Wheat Apple Cinnamon Yeast Bread recipe also includes Greek yogurt (but you can use buttermilk if you prefer). Either way, the result will be a tender crumb not unlike my favorite cinnamon rolls.

Top this apple-studded loaf with a streusel topping as seen above, or ice it with powdered sugar frosting as seen below. Frosting will make your loaf taste very similar to a huge cinnamon roll. If you want to be really decadent, pour the frosting on top of a streusel-topped loaf.

How do I store this loaf?

Storing iced bread in a plastic bag can be a messy business. Consequently, I don’t recommend frosting this loaf if you don’t have enough mouths to eat it all in one sitting.

The best way to store most homemade bread is stored in a plastic bag and room temperature. Take a tip from King Arthur Flour: If you’re storing bread for a day or two at room temperature, plastic or foil (rather than cloth) are the best options.

Storing in the refrigerator can quickly cause your bread to get hard.

How to shape the dough:

The first shown below is my favorite, but it’s a bit trickier to accomplish.

The method pictured below might be easier if you are a novice baker.

Can I make this Apple-Cinnamon Bread Machine recipe ahead of time?

Certainly!  Make it and bake it. This moist bread only gets better the next day or two or three. It also freezes well after it has been baked. It’s perfect to make in the days leading up to Christmas because it only gets better after hanging around for a day or two. 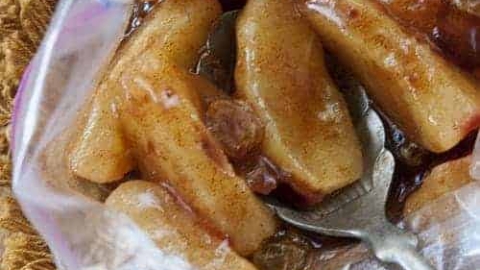 Apples in a Bag 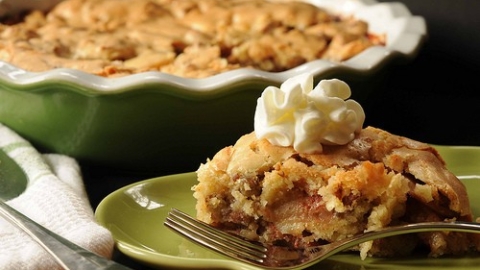 Swedish Apple Pie is baked in a pie plate without a crust. Apples are covered with a sweet batter. 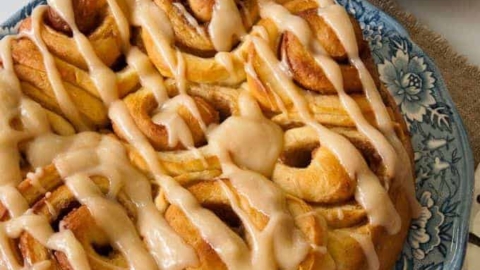 How To Make Cinnamon Rolls with the Tangzhong Technique

These cinnamon rolls are so soft, flaky, buttery, and ooey-gooey, they probably won't last more than one day. But if you have leftovers, you'll be surprised how yummy they are. 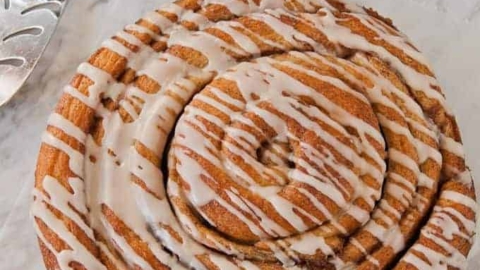 A Texas-Sized Cinnamon Roll from a Bread Machine 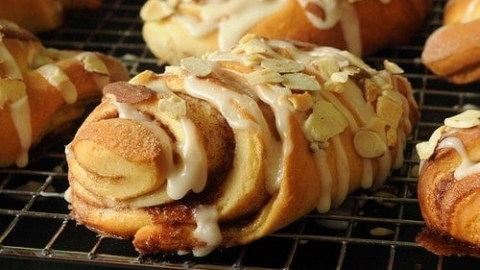 Twisted Cinnamon-Pecan Breakfast Yeast Bread is a yeast bread in the same family as cinnamon rolls--directions for mixing and kneading in a bread machine included. 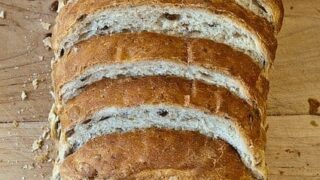 How To Use a Bread Machine to Make Fabulous Bread 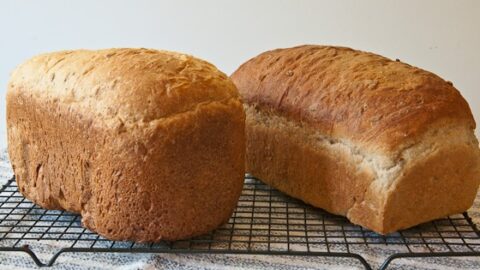 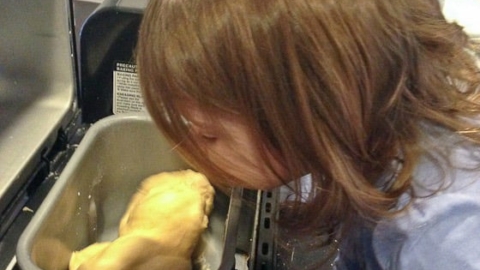 Did you enjoy this recipe? If so, you can help others and me by leaving a 5-star 🤩 rating inside the recipe below. No comments are required.

"Apples in a Bag" 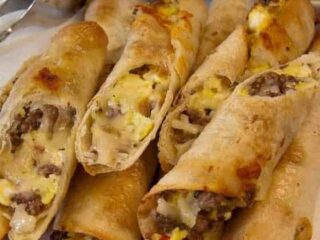 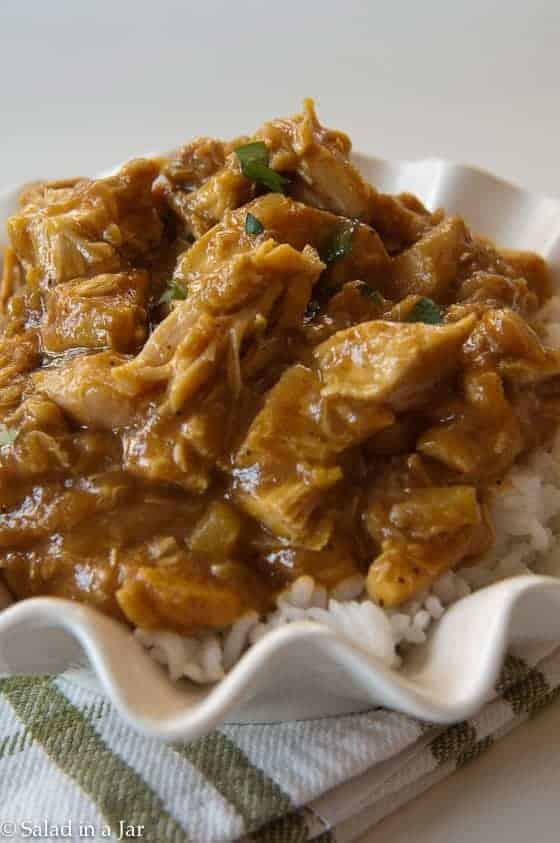 Hi there. Just made the apple filling. How thick is the filling supposed to be? I have liquid.

@Paula, thanks for your reply. I think it was because of the apples I used...I bought a new-to-me variety called Ginger Gold. Anyhow, I had prepared the filling early in the process and by the time the dough was ready for the filling, the apples had thankfully absorbed the extra moisture. I ended up using the crumb coating. Hubby and I had some for breakfast this morning...this is lovely bread, you won’t find anything like this at the store. I’m excited to check out your other recipes. Thanks Paula!

Glad you wrote. Some apples contain more water than others and some are bigger than others. Also, microwaves vary wildly. If you want the juices to be thicker you can add a little more cornstarch. If you think you have added plenty of cornstarch, it may be that you just have to microwave a little longer because your apple is bigger than average or juicier than average. Hope this helps.

I’m making this right now. I followed the directions in the link to make it by hand. It says to proof the yeast in 1/2 cup of water if using active dry, which is what I did. I did not reduce the buttermilk (added 2/3 cup) and now it is like soup. I guess I am going to add more flour until I can knead it? But worried it’s ruined. Help?

Hi Leanne, The instructions I linked to are rather unclear. (I no longer link to these directions but looks like I missed this recipe.)

It's easy to see how you were misled. I will rewrite this recipe with specific instructions for using regular yeast (that needs to be dissolved before using) as opposed to instant or bread machine yeast. In general, you should use part of the original liquid specified in the recipe to dissolve the yeast. The total liquid must remain the same or you will have to add more flour--as you correctly guessed.

Regarding the problem of the yeast not rising, there could be several reasons. Was the yeast active and bubbly when you dissolved it? If not, then it was probably dead. Did the yeast come in contact with a liquid or other ingredient that was too hot? This will kill it. If the yeast was not dead, was the ambient temperature of the location where the dough was located warm enough? This can make a huge difference, especially in the wintertime.

My apologies that this bread didn't work for you. I hope this explanation has been helpful.

This looks yummy! But I missed the part about the apple filling somehow. Do you add raw apples in the machine and then make apples in a bag to spread over the dough before rolling and slicing/shaping?

I am so thankful you wrote. You see, I have been converting all my recipes to a new format. Sometimes, things get lost in the cracks during the process. I try to check each recipe but occasionally, I miss something. I fixed the recipe so I think it will be more clear for you. The raw apples are part of the "apples in a bag." Check it out and let me know if you still have a question.

I love the variety of ways you creatively shape yeast doughs and this one I've had bookmarked for a long time. Plan to make it this week.

I want to thank you for sharing your method of cooking apples in the microwave. We've been enjoying them on top of pancakes a few weekends in a row while Trader Joe's has been selling the most delicious honeycrisp apples. I use apple cider in place of the water when I have it--delicious.

I somehow thought you stopped blogging and was pleasantly surprised to discover that's not the case last night. I love your blog, your recipes, and you! Thank you for all the hours you put into this space for others to enjoy! I love it here.

So nice to hear from you Julie. Love your idea about using apple cider in place of water.

I did slow down on the blogging after my mother died but picked it back up again over the summer when I had it "remodeled." Your words are very encouraging. Hope the bread turns out delicious for you. Paula

I do want to make this. It looks so yummy!

You are right Annemarie. Cut it all the way in half. I hope you love it as much as we do.