Sneak Peek: This Bread Machine Monkey Bread is a scratch recipe you can mix and knead in a bread machine. Make it sweet or savory. It’s so buttery and soft, that you’ll be excited to share it with people you love.

As you can see, this is not the usual biscuits-out-of-a-can-rolled-in-a-ball-then-coated-with-cinnamon-and-sugar kind of pull-apart monkey bread. Oh, no!

There are no small balls to roll. So instead, use a pizza cutter to cut the dough pieces quickly. Then, drag the dough through a bowl of butter on its way to the pan. (I don’t usually coat the pieces with cinnamon and sugar, but you can. See the variation below.) You’re going to love it!

As usual, I designed this recipe to be mixed and kneaded in a bread machine. I much prefer to bake it in my oven, but if you need to use the bread machine to bake your bread, I have included instructions for how to do that below.

No bread machine? No worries! See the notes at the end of the recipe for mixing by hand or with a stand mixer.

It’s hard to resist so much buttery goodness.

This recipe is one of my family’s favorite bread recipes (along with Cheesy-Crusted Yeast Rolls). Don’t miss the traditional sweet monkey bread version below.

Before children, I worked at The Greenhouse, a luxury health spa back then with connections to Neiman Marcus. Ms. Helen Corbitt, a celebrated chef at the time, had planned all of our menus using her recipes. That’s where I learned about this beautiful buttery, brioche-like bread.

I found this recipe in Helen Corbitt Cooks for Company. Of course, Ms. Corbitt did not have access to a bread machine, but I’m pretty sure she would be thrilled to see how much easier it is when mixed and kneaded with a bread machine.

How I converted this old traditional recipe for a bread machine:

This recipe was published in the ’70s. I converted it to mix in a bread machine and match my preferences. Here’s a list of the changes I made:

Why I check the dough after the bread machine starts:

A bread machine doesn’t have a brain. So sometimes, you need to help it out. But don’t worry. It’s not hard to open the lid and have a look.

Suppose you forget to add all the flour. Or maybe you were in a hurry and didn’t measure the flour correctly. Perhaps you are experiencing high humidity or substituting a different flour than called for in the recipe.

Your bread machine will keep on mixing without regard to any of these issues. However, peeking at the dough after the machine has been kneading for a few minutes will give you a chance to make adjustments.

After the machine has been on for 10-15 minutes, open the lid and check the progress.  Several things might be going on you will want to remedy immediately.

1. What will the dough look like when it’s perfect?

The perfect dough will gather up into a ball that sticks slightly to the sides, then pulls away.

Your dough is too wet if it looks like pancake batter. It’s also too wet if the dough sticks to the side but won’t pull away.

Add flour one tablespoon at a time until it looks like the bottom picture.

Add one tablespoon of liquid at a time until the dough looks like the bottom picture.

4. Another reason to open the lid

Another reason to check your bread is to ensure you have pushed the pan down tightly, so the kneading blade is engaged.  Otherwise, nothing will be happening in your pan even though you hear the bread machine running. The same thing happens if you forget to put the blade in the pan.

If you serve this on a buffet to people who don’t know about it, they often won’t touch it, thinking it is a dessert or cake.  But once somebody pulls off the first piece, it’s “Katie, bar the door!” because it will disappear in a flash.

After dipping the dough pieces in butter, coat them with a mixture of 1 cup granulated white sugar and two teaspoons of cinnamon. Arrange pieces randomly in a bundt pan. Let rise until almost double. Bake as directed.

I have another recipe very similar to this with lemon flavors. If you are a lemon lover, check out this Lemon Pull-Apart Bread Machine Recipe. Another monkey bread variation that’s a bit more trouble but also unique is my Party Bread with Three Flavors. If you love adventures in the kitchen, don’t miss this one.

How to mix, knead, and bake in a bread maker:

Baking bread in your machine doesn’t mean you are limited to ugly and weirdly-shaped loaves. Yes, the final product will still be in the general shape of the bread machine pan, but the top will be different depending on how you shape it.

If you want to, pull the dough out of the bread machine before the last rise. Then, remove the paddles and shape the dough by hand. Then, place the dough back into the machine.

Baking bread this way will result in a crust that is thicker, and less tender than if you bake your bread in a conventional oven using the method shown below.

1. Remove dough before the last rise.

2. Remove the paddles if stuck in the dough.

3. Shape it into a rough circle.

4. Use a pizza cutter to make diamond-shaped pieces.

6. Layer dough pieces inside the pan.

7. Allow the bread cycle to continue and bake.

8. Immediately remove bread from the pan and allow it to cool.

Allow your guests to pull apart the rolls.

How to roll out the dough for savory bread machine Monkey Bread when baking in the oven:

I use this method when I use the bread machine on the DOUGH cycle. Baking this bread in a conventional oven makes the best crust and a beautiful golden loaf in a bundt pan.

Follow steps one through five above. Then, use a bundt pan to hold your dough pieces. The dough will rise in the pan one time, then you will bake it in your conventional oven.

Dip each piece into melted butter and layer them somewhat haphazardly into a nonstick bundt pan. Cover with plastic wrap, a cheap shower cap, or a tea towel.

When the bread has risen to almost double its original size, place it into a preheated oven. (Don’t let the dough rise to the top of the pan. That likely means it is overproofed and may fall when it hits the high heat in the oven.)

Why is my bread so dense in my bread machine?

There are many reasons for dense bread when using a bread machine. Inaccurate measuring can result in a dough that is too dry or too wet among other things. Other causes include an extremely cold or hot kitchen, old yeast, inappropriate substitutions (using whole wheat flour instead of bread flour), or leaving out certain ingredients such as salt.

Can you substitute another pan for a Bundt pan?

Yes. You won’t get the same effect but a loaf pan or a 1-piece angel food cake or tube pan will work. The pan you use needs to be leak-proof, so a 2-piece angel food cake pan or a springform pan is risky. Opening your hot oven to smoke because the buttery coating or sugary mixture has leaked onto the oven floor is not a pleasant experience.

How do I make my bread more fluffy?

1. Weigh the flour instead of using measuring cups.
2. Open the lid of the bread machine and check the dough as it kneads. Add flour or water if needed.
3. Provide the optimum temperature (75˚F) for the bread to rise–not too hot or too cold. A microwave with a hot cup of water set inside is the perfect incubator. Yeast loves the humidity.

Can I make this recipe with whole wheat flour? 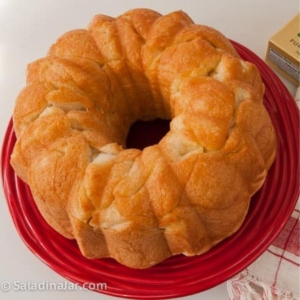