Sneak Preview: Try this giant cinnamon roll cake for a fun twist to your holiday breakfast tradition. The recipe is easy to mix up in a bread machine or stand mixer.

Do you have a Christmas breakfast tradition? Christmas morning without cinnamon rolls would be like a tree without lights. Sad.

My cinnamon roll recipe is traditional, but no harm in changing up the appearance. Right? I’m always looking for a new twist and this variation for a Texas-sized giant cinnamon roll cake fills the bill.

No bread machine? See instructions for mixing this recipe by hand or with a stand mixer in the notes at the end of the recipe.

After modifying my original cinnamon roll recipe just slightly, these rolls are a touch richer and even more delicious.

As seen in the picture below, rolling out the dough for this Giant Cinnamon Roll is a departure from the classic method.  I will try my best to describe the process but if you are confused, email me or leave your question in the comments.

Try this magical substitute for cinnamon:

I have a new vice called Homemade Chai Spice Blend from a blog named Perry’s Plate. Not only is it remarkable in many of the foods the blog-author suggests, but also with some of my own ideas.

Try it as a substitute for plain cinnamon in the filling of this huge cinnamon roll for a taste experience you won’t soon forget.  That being said, you can’t go wrong with the traditional brown sugar and cinnamon filling.

Are you a new owner of a bread machine?

A bread maker is one of my best friends in the kitchen. However, I don’t use it as most people do. Instead, I only use the DOUGH cycle to mix and knead the dough. Then I shape the dough by hand and bake it in a conventional oven. It opens up a whole new bread-making experience. 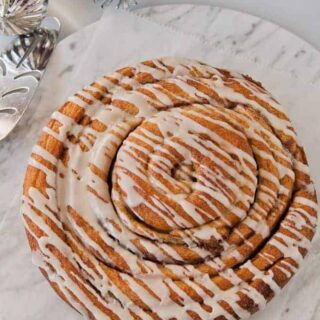 Author: Paula Rhodes
Course: Bread
Cuisine: American
Keywords: bread machine,brunchcinnamon rolls, yeast bread
Like this recipe? Thanks for leaving a 5-star rating inside the recipe at the top! 🤩