You are here: Home / Recipes / Veggie Tacos with Squash and Potatoes 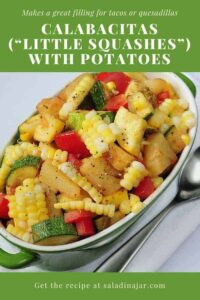 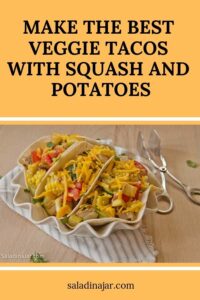 Pan-fried green and yellow squash and lots of other veggies fill a soft flour tortilla. Along with shredded cheese, they make a colorful and enticing soft taco. OR, make the same recipe and use it as a tasty vegetarian side dish.

Have you ever found yourself craving real food after you’ve been on vacation eating mostly fast food?

Bring on the vegetables! Salad! Color! Anything but fried food and sandwiches, right?

Squash and potatoes made into soft veggie tacos are just what the doctor ordered for such cravings.

When I see yellow squash, zucchini, and sweet corn in the store, I start salivating for “.” That’s Spanish for “little squash.” Although these gorgeous colors and fresh flavors used to be the staples of summer, seasonality no longer seems to matter.

Don’t be afraid to mix it up.

Feel free to play fast and loose with the traditional ingredients and seasoning. I’m not thinking most people put potatoes in their “calabacitas,” but I love the texture.

No good tomatoes at the store? Leave ’em out. Got a few mushrooms in the produce drawer? Add them with the potatoes. Don’t like spicy? Leave out the green chilies. Like garlic? Go ahead. You get the idea.

Kitchen Secret about getting fresh corn off the cob in chunks:

Want to know how to get the corn to come off the cob in little chunks? After you have cooked it, drop the whole cob into ice water for a few minutes. The corn will fall off in beautiful little chunks if you don’t get in a hurry while slicing.

What else can I do with Squash and Potatoes?

When this filling is waiting in the fridge, it makes me wish the clock hands would hurry up and move to 12:00 noon so I can eat.

If you make this recipe and enjoy it, consider helping other readers and me by returning to this post. Leave a rating on the recipe card itself underneath the picture. Although always appreciated, comments aren’t required. Thank you for visiting! Paula

This post was originally posted in 2010 but has since been updated, edited, and republished in February 2019. 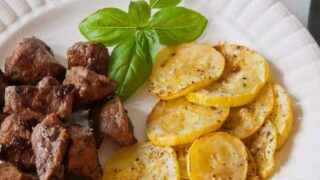 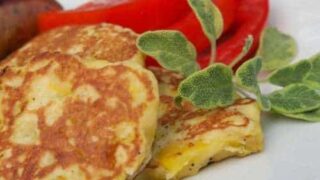 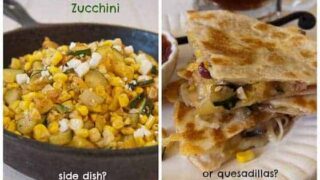 Make this side dish of Street Corn and Zucchini with taco seasoning and Feta cheese for one meal and turn the leftovers into delicious quesadillas the next.

The popular Scooter's Baked Spaghetti gets a remake with zucchini noodles instead of traditional spaghetti. 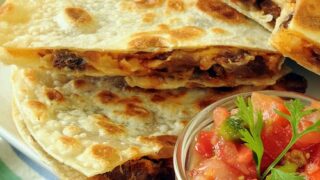 Chopped brisket, brie and pepper jack cheese get a drizzle of barbecue sauce between a couple of flour tortillas to make these tasty quesadillas.

Previous Post: « 15 Valentine’s Day Dessert Recipes To Delight Your People
Next Post: 9 Secrets to the Best Homemade Pizza Without a Baking Stone »