What if you could walk into your grandmother’s house right now and go to her cookie jar? What would you hope to find?

I would be looking for these Cinnamon Jumbles. Grandma made them frequently. Oh, how I wish I could walk into my Grandma’s kitchen right now and grab a couple.

She dropped big blobs of dough on the cookie sheet.  The lumps tended to grow together as they baked. So she cut them into squares.  They were rather ugly–but still delicious.

Grandma wrote her recipe in the back of one of her cookbooks. It looks like she called them “Jubilee Jumbles.” I found a similar recipe in a Betty Crocker Cookie Book entitled “Cinnamon Jumbles.”

I have updated this recipe with substitutions for shortening and evaporated milk. They taste even better, in my opinion.

Try them for yourself.  Frosted Cinnamon Jumbles go down r-e-a-l easy.

Cinnamon is the star ingredient in both Snickerdoodles and Cinnamon Jumbles. However, the differences are significant.

BUTTER: The original recipe in Betty Crocker Cooky Book called for hydrogenated shortening, as in Crisco. Since many people don’t want to use it, real butter works just as well and even tastes better. I don’t recommend using butter substitutes.

BUTTERMILK: If you don’t have buttermilk on hand, try one of these substitutions.

Use plain unflavored yogurt (2% or whole milk). Add milk until it is the consistency of buttermilk and measure as you would buttermilk.

A well-known substitution for buttermilk is one tablespoon of white vinegar or lemon juice added to enough milk to measure 1 cup. Stir and let it stand for a few minutes before adding to the recipe.

Have some sour cream in your fridge? You have everything you need to make a buttermilk substitute! You can swap out buttermilk for a mixture of equal parts sour cream and water, whisked together until smooth. —Foodess.com

SUGAR: My preference is 100% granulated white sugar. As you can see in Grandma’s recipe, she used part brown sugar and part white sugar. Using brown sugar will make a darker-colored cookie and increase the moisture.

Sprinkle the wet icing with colored sugar: Red or pink for Valentine’s Day or Christmas, green for St. Patrick’s, orange and black for Halloween.

Another way to add variety is using different flavors, such as chocolate or plain white powdered sugar icing. Try adding food coloring to white icing to match your party theme.

Substitute eggnog for the yogurt or buttermilk. Instead of baking soda, use one teaspoon of baking powder. When making the icing, use eggnog in place of the cream. In addition to the cinnamon already specified in the recipe, add 1/8-1/4 teaspoon of ground nutmeg.

How to make Cinnamon Jumbles:

How to make Brown Butter Icing

Tell me. Did your grandmother make these cookies? Have you ever tried them? Then, please tell me what you think in the comments below. 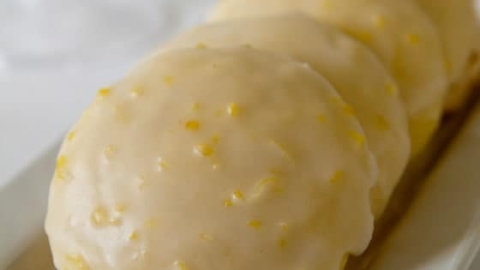 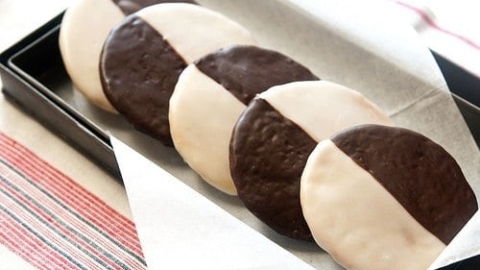 This Black and White Cookie recipe is smaller in size than the classic cookie but fresher and tastier than the average store-bought black and white cookie. 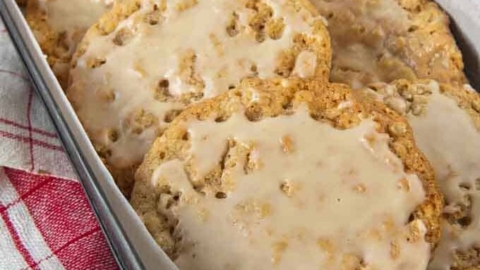 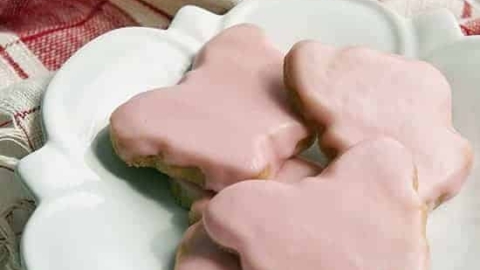 A simple but delicious shortbread cookie with a smooth butter icing. Kids and adults alike love these.

Did you enjoy this recipe? If so, you can help others and me by leaving a 5-star 🤩 rating in the recipe below. No comment is required.

I actually made these cookies... and they turned out GREAT!!!!!! I was scared about browning the butter, but it was so simple! My kids love them, and their friends at school love them...apparently they share homemade cookies from their lunchboxes. Maybe this will be a Christmas tradition that my kids can trace back to their great-grandma! Thanks for the recipe!

just made these cookies with my friend, they’re incredible. thanks ;-)

i tried this and my kids loved it! thanks for sharing :)

I want to bake the cookies without the icing if I do will they not taste as good?

Hi! Two quick questions: I was just wondering if I can use a cookie cutter (such as a candy cane cutter) for these. Do you have a a rough guess for the calories in these?? Thanks and Merry Christmas!! -Taylor