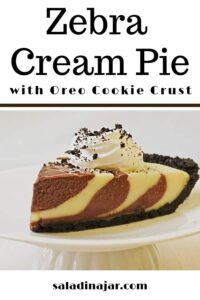 Are you looking for a dessert to make your special friends or family feel loved? Try this recipe for Zebra Cream Pie. Not only is it fun layering chocolate and vanilla cream into a dark chocolate crumb crust, but it’s fun to eat, too.

Some time ago, I read about a zebra cake on The Whimsical Cupcake. My mind started imagining a pie using a similar technique.

Apparently, God was in a creative mood when he made zebras. Seems that every zebra has a unique, one-of-a-kind stripe pattern comparable to our thumbprints.

How many layers does it take to make a Zebra Cream Pie?

Like zebras, every time I put this pie together, it looks a little different.  But it doesn’t matter. The taste is the same.

RELATED POST: Chocolate Cream Tart Made in a Microwave

You can see in the pictures below how the number of layers makes a difference in the final appearance. Take your pick. I think more layers make the pie look more zebra-like.

Nine or ten layers seem to be the limit. Try to do more and your layers, at least some of them, will be so thin they are indistinguishable.

Also, if you try to cut the pie before it is well-chilled, the layers will blur along the cut edges. It won’t affect the taste, of course, but the “zebra” stripes won’t be well-defined.

The best crust for this pie:

Pie crust of any kind is good in my book, especially a flaky pastry. However, the general consensus for chocolate cream pie seems to swing towards a crumb crust.

Pre-made pie crusts are generally not my thing. But a store-bought chocolate crumb crust makes this pie so much easier. A store-bought crust also getting a slice of pie out of the pan cleanly much easier than a homemade crust.

If you can’t find a pre-made chocolate crumb crust or you would rather make it yourself, try this Chocolate Cookie Crumb Crust Recipe from Serious Eats.

With their recipe, you don’t need graham crackers (not usually found out my house). You probably already have all the ingredients in your pantry.

The Dutch chocolate and salt contribute to an unforgettable taste treat. You’ll want to eat the cookie crumbs all by themselves.

Why I like to use a blender and a microwave to cook the cream filling:

The cream filling goes together quickly in the blender. When cooked in the microwave, the result is a lump-free, silky-smooth texture in 6-7 minutes.

If the custard is not thick after 6-7 minutes, keep cooking. Microwaves vary wildly.

Also, remember that the cream filling will get much thicker as it cools. If the hot cream mixture coats the spoon heavily, then the pudding is thick enough.

RELATED POST: Why Banana Cream Pie is Easier To Make in the Microwave

Of course, you can cook the filling on the stove if you prefer. A double-boiler setup helps to avoid scorching the custard. Watch it carefully and stir constantly.

Be sure to allow adequate time for the pie to chill or the layers won’t be distinct when you slice it.

How to make the cream filling in a microwave:

The chocolate filling tends to get thicker than the vanilla as it cools. If it becomes difficult to spread, whisk in an extra teaspoon or two of milk.

How to assemble Zebra Cream Pie:

If you think you have hopelessly messed up the layers, use a knife perpendicular to the pie to gently swirl the cream filling.

Cover with whipped cream and call it “Chocolate and Vanilla Swirl Pie.” It will look like you planned it that way from the beginning, hopefully.

Did you make this and enjoy the recipe? If so, you can help me and others by returning to this post and leaving a rating (on the recipe card itself underneath the picture). No comment is required. Thank you for visiting! Paula

Beat 1 cup cold heavy cream and 1/2 teaspoon vanilla extract until the cream starts to form soft peaks. Add 2 tablespoons of confectioners sugar. Continue to beat until stiff peaks form. Use immediately or store in the fridge for 2-3 hours.

Assembling the pie: (See the video to watch this in action.)

Zebra Cream Pie was originally posted in 2011. The recipe was re-imagined, re-engineered, and republished in December 2019.