Sneak Peek: Learn how to make a Microwave Banana Pudding from scratch that tastes better than instant pudding and is almost as fast. No scorching, double boiler, or standing over a hot stove is necessary.

Do you ever feel like your microwave should be more than a leftover warmer? I used to teach microwave classes in the ’80s and I am in love with it. One of my favorite things is the way it makes a great dessert like this classic banana pudding. It will taste fabulously sweet and creamy without you breaking a sweat–literally!

The day I discovered I could make tasty vanilla pudding in my microwave changed my attitude about making banana pudding. I quit making instant pudding mix and threw away Mom’s old-fashioned pudding custard recipe made on the stove.

A blender or food processor is a quick way to mix up this scratch pudding recipe. Then pour it into a large microwave-proof dish or batter bowl. If you don’t have either appliance, a good whisk and a powerful arm will suffice.

Cook your pudding in the microwave. Layer with vanilla wafers and bananas. Top with fresh whipped cream.

1. No worries about lumps.

Mix all of the vanilla pudding ingredients in a flash with a blender or food processor. The custard mixture will go into the microwave silky smooth. The cooked pudding should come out smooth, assuming you don’t forget to whisk it occasionally. Tempering the egg yolks is unnecessary.

2. This recipe is so uncomplicated that you can memorize it.

This is a huge plus in my book, especially when I don’t feel like cooking.

You no longer need to worry about scorching and then having to scrub the pan. The blender and pyrex bowl you use in the microwave will clean up easily. I throw mine in the dishwasher.

My microwave is SLOW but requires only 7 minutes or less to thicken the pudding. If your oven is relatively new and more powerful, less time will be required. If your oven is old or small, it may take longer. Pay attention the first time or two that you make the pudding to determine the proper cooking time. Write the time down and you won’t have to think about it again.

Store-bought vanilla wafers are my go-to cookie for this dessert. But sometimes, I like to make my shortbread crumbles for a dessert that tastes like banana cream pie in a bowl. Oh, my! It’s wicked good!!

How to make banana pudding in a microwave:

4. Cover with half of the pudding.

5. Layer the rest of the banana slices over the pudding.

7. Finish with the other half of the pudding.

Can I make banana pudding ahead of time?

Eat this pudding the same day you make it. Making it the night before is the next best option. However, it needs at least 2-3 hours to chill, so you must make it a ahead of time. Once served, the remaining bananas will turn brown and quickly soften when exposed to oxygen.

Can I make this pudding on top of the stove?

Yes. The recipe will be the same, but the method is more complicated and time-consuming. You would be better off finding a stove-top recipe like this one copied from the back of the box of Nilla wafers.

What can I use if I don’t have a blender or food processor to mix the pudding ingredients?

Whisk the ingredients together as well as you can. Cook this mixture in the microwave as instructed. Whisk every 45 seconds once the mixture begins to thicken. If you have any lumps, pour the pudding through a strainer immediately.

On the bright side, lumps get lost in the banana pudding because of the other textures involved. Don’t sweat it.

If you are as excited as I am about using your microwave to make pastry cream, I have more ideas for you. Try my extremely popular Mini Fruit Tarts filled with vanilla pastry cream made in a microwave. Other possibilities include this unique Zebra Cream Pie and my Speedy Chocolate Cream Pie. Both include pie filling or pastry cream with microwave instructions. 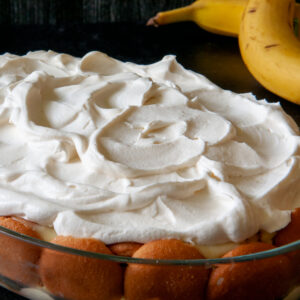 1. If you decide to make your own shortbread, let it cool, then crumble and layer in the same way as vanilla wafers. 2. I don’t use a sieve for this pudding. Mixing in a blender before microwaving prevents lumps. However, if the pudding does turn out lumpy, push it through a coarse sieve before it cools. 3. I also use this recipe to make banana cream pie, coconut cream pie, and chocolate cream pie. 4. Many people put meringue on top of their banana pudding, but I’m a whipped cream girl. Suit yourself.