Sneak Preview: These soft and fluffy Tangzhong Cinnamon Rolls (aka Japanese milk bread cinnamon rolls) employ the Tangzhong technique and a bread machine to make a sweet roll that stays soft and fresh longer than most homemade cinnamon rolls.

Cinnamon rolls are like donuts. They taste best the day you bake them. But sometimes, you want or need to make and bake them ahead of time.

Making Cinnamon Rolls with the Tangzhong technique (aka Japanese milk bread) and a bread machine is the answer to your dilemma.

To be clear. Nothing beats a fresh-out-of-the-oven cinnamon roll. But unless you have ten hungry kids waiting to devour them before the icing sets, these are wonderful for savoring over several days.

No worries if you don’t have a bread machine. See directions in the recipe notes for using a stand mixer or mixing by hand.

Why these milk bread cinnamon rolls are the BEST:

Using the Tangzhong technique extends the shelf-life of these homemade Cinnamon Rolls longer than most homemade rolls.

They are appropriately ooey-gooey with a lighter, flakier, and more buttery texture.  Counterbalance all that sweetness with the spicy but not overpowering flavor of cinnamon with the tiniest pinch of ground cloves.

What’s different about the method of mixing with the Tangzhong technique?

1. Begin by making a paste mixture using half of the milk and 3 tablespoons of flour.

This variation is called the Tangzhong technique. I use the microwave for cooking the paste because it’s quick. However, if you prefer, heat the milk and flour mixture in a small saucepan using medium heat on the stove.

It’s only one extra step. After you do it once, it won’t add much time beyond what’s required for normal cinnamon rolls

2. The Tangzhong method enables a higher ratio of liquid to flour.

Using the paste mixture made in step #1 results in a dough that needs less flour. In this particular recipe, the liquid (milk, egg, and heavy cream) equals 292 grams. The amount of flour is 360 grams. This works out to 81% hydration.

3. What is the purpose of using the Tangzhong method?

This method produces rolls that are softer, fluffier, and almost flaky. The simple Tangzhong technique also seems to prolong the shelf life or freshness of homemade bread which generally contains no preservatives.

How to mix up cinnamon rolls with a bread machine:

1. Whisk 3 tablespoons of flour into 1/2 cup of milk. Cook in the microwave for 1+ minutes, whisking every 30 seconds until the mixture turns into a thick pudding consistency. Don’t worry if there are a few small lumps. If you accidentally let it overcook into a single mass, it’s best to start over and watch it closer.

2. Add the remaining 1/2 cup milk to “pudding” and pour it into your bread machine.

3. Add the rest of the ingredients. Set the machine on the DOUGH cycle and press “Start.”

4. About 10-15 minutes into the cycle, take a peek. The dough should stick to the side and pull away cleanly. See pictures and more details about why this is so important here.

The dough should look similar to this picture when the kneading has finished.

5. After the dough cycle is finished, check that the dough has risen to nearly double the original size. If not, leave the dough in the machine until it does.

6. When ready to roll out, two fingers poked in the dough will leave an indentation that won’t fill in.

Open the lid to your bread machine as it mixes, and take a look at the dough. Check to see if the dough has the right consistency. It should stick to the side, then release cleanly. If you want more information about this process, go here to read the secret to making better bread in a bread machine.

At first, the dough will be lumpy with a rough texture. However, after about 20 minutes of kneading, it should begin to look smoother and more elastic.

Checking on the dough is VERY IMPORTANT to your success with bread in general, but especially with a bread machine.

How to roll out cinnamon rolls:

Nothing new here. This method is the traditional way to roll out cinnamon rolls.

Remove dough from your bread maker pan to a floured surface.

Divide dough into 2 equally-sized dough balls. Roll out one dough ball into a 13 x 10-inch rectangle.

Spread softened butter over the rectangle.

Sprinkle the buttered surface with the brown sugar and ground cinnamon mixture.

Begin rolling from the long side to make a cylinder as tight as you can.

Cut rolled cylinder in half. Use a serrated knife or dental floss to cut each half into four evenly-sized slices.

Arrange in a 9-inch round baking pan sprayed with Baker’s Joy or a similar flour-oil aerosol.

Cover the rolls lightly. Use a cheap shower cap, a tea towel, or loose plastic wrap.

When the dough has almost doubled in size, preheat the oven to 375˚F in preparation for baking. Be careful not to let rolls rise too much, or they will fall when baking.

Baker’s tip for rolling out the dough:

Cleaning after rolling out dough on the counter can be such a mess! Consequently, I use a silicone baking mat. When finished, shake the mat out in the trash or the sink, then throw it in the dishwasher. Yep! That easy.

Just one caveat: If you cut on it as I do, use a light hand so you don’t slice a hole in the mat. I know, I know. Of course, the manufacturer of these mats would not endorse this practice. But, I’ve been doing it for many years, and the process has not harmed a single mat.

FAQ about making cinnamon rolls with a bread machine

What does Tangzhong mean in English?

According to Wikipedia, it literally means “water roux.” Tangzhong is a Chinese term. Yudane is the Japanese name for a similar technique. Japanese milk bread is a common name for bread made with either of these techniques.

Why use a bread machine to make cinnamon rolls?

In my experience, the bread machine is the easiest and most fool-proof way to get the best product. Nothing kneads better than a bread machine. In addition, the DOUGH cycle automates the mixing and kneading so you can walk away and know the machine is kneading the dough to perfection.

No bread machine? See alternate instructions for making these rolls with a stand mixer in the notes of the recipe.

Can I substitute regular yeast for the bread machine or instant yeast?

Yes. Active dry yeast no longer needs to be dissolved. Use the same amount listed. Be aware that sometimes it can be a little slower in rising. Be patient.

Can I mix these cinnamon rolls the night before and bake them the following day?

Yes. After you make the dough into rolls and have arranged them in the pan, cover and refrigerate. You can also freeze them at this point. Either way, allow extra time for the rolls to come to room temperature and double (almost) in volume before baking them.

Can I use bread flour instead of all-purpose flour for these rolls?

Yes. The texture will be slightly chewier. Use all-purpose flour for the tenderest rolls. Also, the amount of liquid you need may vary if you use bread flour. Be sure to check the moisture of the dough as it’s kneading.

How can I make my cinnamon rolls less dry?

First, weigh the flour instead of using measuring cups. People who don’t measure nearly always add too much flour. Second, check the moisture of the dough while it kneads in the bread machine. It should stick to the sides, then pull away cleanly. Third, use a quick-read thermometer to know for sure when the rolls are done. The internal temperature should reach 190˚F. Be careful not to take the temperature in the gooey filling which will read hotter.

Can I freeze this dough ahead of time?

Yes. Freeze the unshaped dough as soon as the DOUGH cycle ends. Alternatively, freeze the shaped rolls before the final rise. Double wrap and store either in the freezer for up to a month.

When ready to use, let the dough thaw and shape the rolls. Allow a final rise before you bake them. If you froze shaped rolls, allow them to thaw and become puffy before baking them as directed.

Can I freeze the baked rolls?

Yes. Double-wrap them and eat them within a month. The rolls will taste pretty good if you zap them briefly in the microwave and eat them immediately.

Parting thoughts: Are you wondering if these cinnamon rolls are worth the bit of extra trouble? I think so. To me, Tangzhong cinnamon rolls have a better texture and flavor than most cinnamon rolls. However, we all have different tastes, standards, and priorities. So, if you want a more straightforward recipe, try my original cinnamon roll recipe. 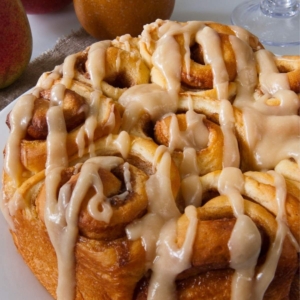