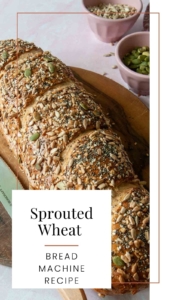 Sneak Preview: This Unique Sprouted Wheat Bread Machine Recipe with Honey and Seeds is so tasty you will enjoy eating it even if you don’t care about the benefits of sprouted wheat flour. Sunflower, pumpkin, sesame, flax, chia seeds, and a surprise secret ingredient maximize the flavor.

My readers seem to like experimenting and trying new things. Are you like that? I’m guessing you are somewhat adventurous if you are willing to tackle making bread at home.

A while back, one of my fearless readers asked for a sprouted wheat bread machine recipe. This is my answer. I’m pretty sure she’ll go crazy for it.

Like always, I use a bread machine to mix and knead the dough because it’s the best kneading machine in town. But since I don’t care for the crust a bread machine produces, I use the DOUGH cycle, then shape the dough by hand. After a final rise, I bake the loaf in my conventional oven to produce a gorgeous golden-brown crust in a traditional shape.

You can use a stand mixer if you don’t have a bread machine.

What is sprouted wheat flour?

Sprouted wheat flour is made by soaking wheat berries in water until they start to sprout. Some people enjoy sprouting wheat at home, but it takes time and attention. So for me, I prefer to buy ready-to-use sprouted grain flour.

I’ve tried sprouted flour made from hard red wheat berries and hard white wheat berries and found them equally scrumptious in this recipe. If you are curious, you can read more in this article about the various characteristics of these two flours.

Where can I buy sprouted wheat flour?

The sprouted flour shown in the ingredient picture below is from King Arthur and is white whole wheat sprouted flour. However, it is not currently available. I don’t know when or if it will ever come back.

Is this sprouted wheat bread the same as Ezekial bread?

Not exactly. Many varieties of sprouted grains and legumes go into a loaf of Ezekial bread. I think a beginning bread maker would find it challenging (if you could find an authentic recipe) and expensive to make Ezekial bread one loaf at a time in a home kitchen.

However, this recipe is pretty simple. You can always play around with different seeds while keeping the ratio between the flours and the seeds the same.

How to make Sprouted Wheat Bread:

Add the dough ingredients to the bread machine pan in the order listed.

Open the lid after you hear the bread maker start to mix to make sure the paddles are engaged.

After 15 minutes of kneading, open the lid and check the consistency of the dough. It should stick to the side, then pull away cleanly. See the recipe for what to do if that is not happening.

While the dough mixes in the bread machine, toast the sesame, sunflower, and pumpkin seeds. I do it in my microwave on the HIGH setting for 45 seconds. Set in the refrigerator or a freezer to cool before going to the next step.

Use a sharp knife and chop the seeds as finely as you can. If you prefer, use a food processor blender to do the chopping. Don’t let the seeds turn into a paste.

Add ground seeds to the dough in the last 5 minutes of the kneading phase or whenever your machine beeps that it is time for add-ins.

This dough has the perfect amount of moisture. The dough sticks to the sides as the paddles knead, then pulls away cleanly.

Use two floury fingers to check the dough at the end of the DOUGH cycle. After pushing your fingers into the dough, it should slowly fill in. If it fills in quickly and you can barely see where your fingers punched into the dough, leave the dough inside the bread machine pan until the dough doubles its original size. If the holes you punched don’t fill in at all, the dough is likely over-proofed.

Pull the dough out of the bread machine pan onto a lightly-floured surface when it has doubled in size.

Use your fingers to push the dough into a rectangular shape and push the air out of the dough.

Roll the dough starting with the long side closest to you.

Use your fingers to pinch the seam together

Pull the dough on the ends toward the seam side and pinch the edges.

Flip the loaf over so that the seam side is down. Cover with a towel. Allow the dough to rise (the second rise–the first rise was in the bread machine) until it’s slightly less than double its original size. This may take 45-60 minutes or even longer in the dead of winter. Don’t go by the clock. Go by the appearance of the bread.

Make the glaze and brush it onto the bread. Try to avoid drips.

Sprinkle with the remaining UNTOASTED seeds. (They will toast as the bread bakes.) Transfer the silicone mat (or parchment paper) onto a cookie sheet for baking.

FAQ about Sprouted Wheat Flour Bread made in a bread machine:

How long will this bread stay fresh?

This bread has no preservatives, so it will always be best the day it is baked. I recommend storing whatever you don’t eat after a day or two in the freezer, double-wrapped, of course.

The germinating process breaks down the grain’s starch, increasing the relative amount of vitamins and nutrients it contains. According to the Alvarado Bakery website, folate, fiber, vitamin C, zinc, magnesium, and B vitamin levels are higher in sprouted grains than in traditional grains.

Sprouted grain bread is lower in carbs and calories and has less of an impact on blood sugar compared to other types of bread. It may even help you lose weight, according to Healthline. 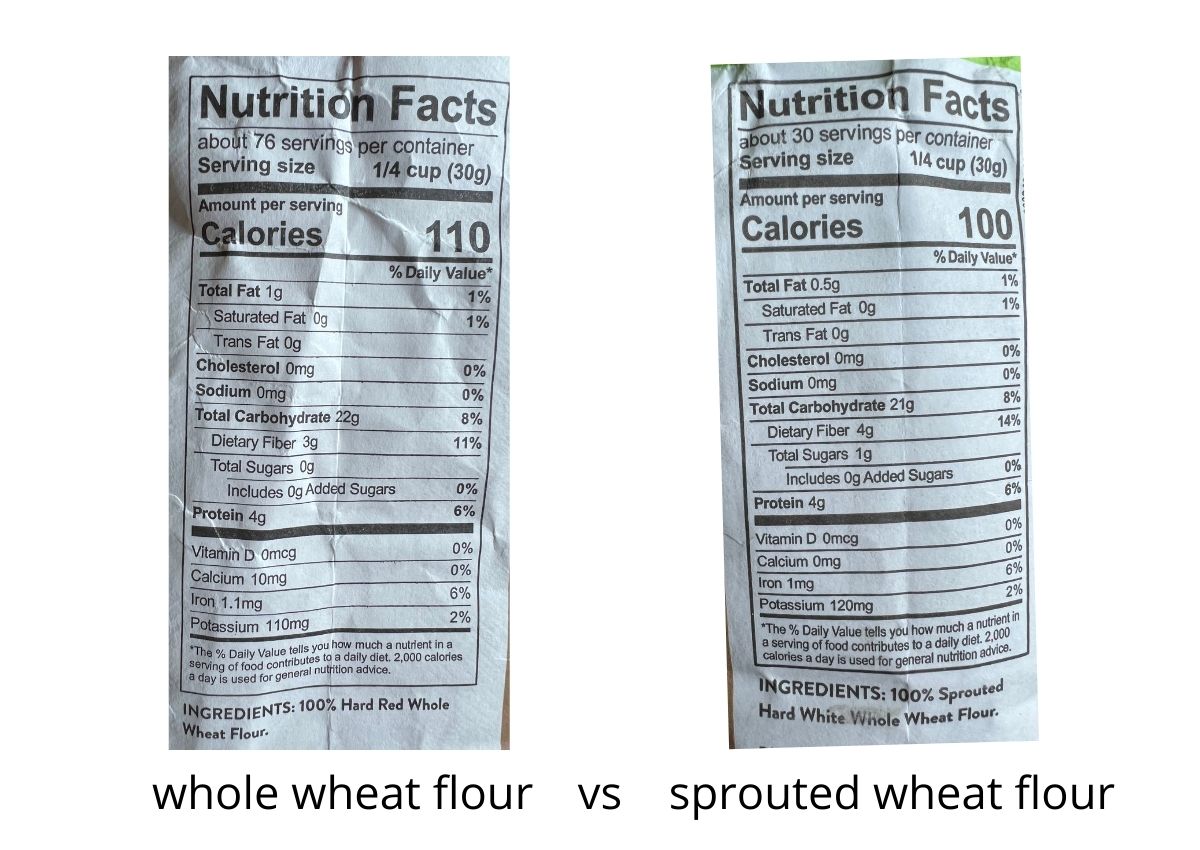 What is the best way to measure the ingredients?

A digital scale is the most accurate way to measure. However, the recipe does give cup measurements if you don’t have digital scales. Using measuring cups will often produce a dry and dense loaf. Unfortunately, people don’t always measure correctly and inadvertently use too much flour.

How do you serve sprouted grain bread?

This slightly-sweet bread makes excellent toast and sandwiches. Of course, the best way to eat it is fresh out of the oven with soft butter or jelly. However, the texture of the bread will be better if you let the bread cool for an hour before cutting it.

Can I bake this bread in a bread machine?

Honestly, I haven’t tried it because I don’t like baking bread in a bread machine. Three things to consider:

1. Anytime you use whole grains, the dough may take longer than the rise period programmed into the machine. When that happens, the result is dense bread.
2. It’s more difficult (but not impossible) to catch the dough at the right time to apply the glaze and seeds.
3. The bread is restricted to a loaf shape. Ok, if you are making sandwiches, but the visual appeal isn’t the same.

Although this isn’t exactly like Ezekiel bread, I hope you will judge this recipe on its own merit. After all, who can top the flavor of fresh-out-of-the-oven homemade bread customized to your flavor preferences? Another recipe you might want to check out is my 100% Bread Machine Whole Wheat Recipe.

Honey Wheat Bread Machine Recipe To Build Your Confidence: This is an exceptionally light and soft sandwich bread with whole wheat flour and white bread flour. You’ll be making this recipe on repeat!

Bread Machine Whole Wheat Rolls: Good for Slider Buns, Too: These rolls are sturdy but soft and tasty, making them suitable for buns or mini-sliders.

Do you have questions about using a bread machine?

Why is My Bread so Dense? (Includes a Bread Machine Section): This post will address the most common causes of dense and heavy bread. Don’t miss the final section devoted to issues unique to bread machine users.

If you have questions or suggestions, email me privately for a quick answer: Paula at saladinajar.com. Hope to see you again soon! 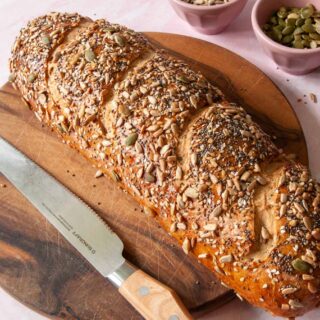 This recipe was loosely adapted for a bread machine from BREAD Illustrated by America’s Test Kitchen.